It disturbs me that I keep hearing phrases like ‘a passive, feminised Christianity‘ and ‘men are staying away from the feminized church’. Mark Driscoll has me nailed – trust a ‘chickified dude with limp wrists’ to get worried about this stuff. A middle-aged friend complained to me that her church had become too feminine, and that was why some men had stopped coming – never mind that in this church, women aren’t even allowed to lead the service, let alone preach! The misogynistic assumptions behind this language and this concept should be obvious – feminine=negative, masculine=positive; feminine=passive, masculine=active. How can we talk like this, even after our eyes (should) have been opened to centuries of the oppression of women in churches?

Mark Driscoll didn’t invent this thinking; the New York Times quotes Billy Sunday making the complaint in 1916. But Driscoll is certainly the face of an aggressive evangelical masculinity taken up by Young Calvinists. I’ve heard rumours of sermons about cagefighting.

Yet if this language and critique is directed at the emotions-driven, megachurch style of evangelicalism which has become dominant, it is a beast which needs to be targeted. Passive church is not what the body of Christ is meant to look like. Church should be participatory, multi-voiced, the gifts of the Holy Spirit enabling the members to form different parts of the body. (Megachurch advocates will claim this happens in small groups.)

The problem, then, is not the target but the diagnosis. To call ’emotional’ and ‘passive’ essentially feminine traits is unfair and sexist. To my mind, emotional worship and passive churches have come about from the mainstreaming of Pentecostalism and the rise of megachurches. And actually, passive worship extends right back in time to the transformation from multi-voiced churches to priest-focused churches. Different groups – Anabaptists included – have challenged this, but multi-voiced has never been recovered as the norm.

Six years ago, Sean Michael Lucas wrote a thoughtful post about the historical context of the concept of the ‘feminisation’ of American culture. More recently came a great reflection on the stereotypes involved from a Baptist pastor, Sarah Fegredo. 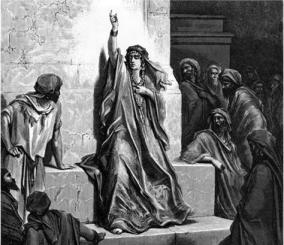 I’ve just released issue 51 of On the Road, the journal of the Anabaptist Association of Australia and New Zealand. This one is the Women’s Issue. Inside, you’ll find a personal narrative from Bessie Pereira, one of the first women to be ordained in the Anglican Church of Australia and now director of a house church network. Andreana Reale gives a succinct and punchy defence of women in ministry. Jeanette Mathews offers a close reading of the Rachel and Leah story, while Sandra Lowther-Owens reflects on faith in hard times and Jen Noonan writes about the sexual exploitation of women in Bangkok in the context of a conference on women doing theology. There is also a new article from Dave Andrews about the two narratives running from biblical times to now – fear versus love.

Here’s the paper I gave at the TEAR conference yesterday:

I shall tell you more about it later in the week, but I told people it would be up here, so I thought I’d better make good on that.

An excellent blog I’ve started following is ‘radref’ from Phil Wood in the UK. It’s a similar blog to this one, but probably more what I wish this one was – ie Anabaptist! One of the focuses of the blog is the challenge of being Anbaptist in a country with almost no Anabaptist churches and only a small presence. Phil writes candidly and knowledgeably.

I haven’t written anything here of substance for all of April. I was going to write something about the reflections of a Christian pacificist in the lead up to Anzac Day, especially when I felt my temperature rising hearing the Dean of the Anglican cathedral in Perth talk about the war medals they have on display there.

I was also going to write about my feelings at hearing the message that a wife must submit to her husband at a wedding of an old friend on the weekend. (I get this impression that conservative evangelicals holds this as one of their most important distinctives as Christians in the world. Indeed the preacher even described female submission/ male sacrifice as The Christian View of marriage. All on the basis of a reading of Ephesians 5:21-23 [and parallels] outside of its cultural context. Paul was transforming the patriarchy into a love-patriarchy; if he was speaking to ‘equal regard’ marriages today, he wouldn’t be calling us backward. But I wrote about this months ago.)

I was going to write about these things but I don’t have the energy, either to articulate my thoughts clearly or to debate these contentious issues.

There was a Christian conference in Perth recently called Mighty Men. I don’t know much about the content of the conference, but the title bothers me. Are we called to be ‘mighty’ as disciples of Jesus? I don’t think so. I think the world wants men to be mighty warriors, but that Jesus had different values in mind. Oh for a conference attended by 2000 men called ‘Being Weak For Jesus’ or some other affront to masculine pride!

Of course, it all depends on how you define ‘mighty’ and maybe the conference defined ‘mighty’ in such a way that I could see value in it. But the problem is that on the surface it is reinforcing a patriarchal, macho masculinity.

Jesus didn’t say that the mighty are blessed. He said the meek are blessed. The mourning. The persecuted. The ones who hunger and thirst for righteousness. He kept emphasising not might but sacrifice, servanthood, being the least. (And I’m sure the conference tried to redefine ‘might’ along these lines.)

I keep hearing the idea that the church is failing men. (Funny that, it’s usually men in charge of churches.) I also keep hearing that feminism has caused men not to ‘know who they are’. (Does that mean identity is tied to being the patriarch for most men?) I don’t know the answer to either of these problems/ perceptions, but I don’t think it should be to christen traditional masculinity.

Feminism has not ‘gone too far’ as so many people are fond of saying. It hasn’t gone far enough yet. There’s still inequality in relationships, imbalanced power structures, different standards for judging women, and not nearly enough women given full opportunities to minister in churches.

So there’s a loose collection of thoughts brought on by seeing this phrase ‘mighty men’ everywhere.

Few arguments are as engaging as humour; perhaps you’ve already seen Maggi Dawn’s top ten reasons why men shouldn’t be ordained. Of course, as an anabaptist, I don’t think anyone should be ordained.

I.H. Marshall’s article ‘Mutual love and submission in marriage: Colossians 3:18-19 and Ephesians 5:21-23’ appears in the excellent collection Discovering biblical equality : complementarity without hierarchy (Apollos: 2004). His article is a good argument for why these passages do not call for male headship today.

Col. 3:18-19: ‘Wives, submit to your husbands, as is fitting in the Lord. Husbands, love your wives and do not be harsh with them.’

Marshall’s argument is that Paul speaks to a world where patriarchy is the norm and urges Christians to transform this by practicising a ‘love-patriarchy’. But this isn’t the final step of the way in the Christian trajectory. The story of new creation that the Bible tells us is moving toward Galatians 3:28 where there is ‘no longer male or female’. Paul was transforming the norms of his day. If he was speaking to us today, he would not be calling us backward from marriages of equality to love-patriarchy. Instead, he would be extending submission and sacrificial love to both partners.

Does Paul’s teaching not only require that people fulfill the requirements of the social structures they find themselves but also mandate the structures themselves? Or does Scripture itself lead us to adapt different structures from those prevalent in the first century – just as we have seen to be the case with children, slavery and government? (195)

Some of Marshall’s important arguments are:

Somewhat Anglican
Create a free website or blog at WordPress.com.